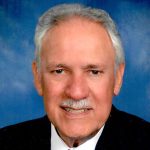 William (Bill) Shoemaker was born on May 17, 1939, and died on February 1, 2021, at 81 years of age, with complications from pneumonia. He is survived by his wife, Lynne Murdie-Shoemaker and his three grown children Dianne DeNecochea, Gail Brenton, and David (Bethany) Shoemaker, whose mother is Mary E. Turner. Bill is survived, through marriage, by Lynne’s children, Susan Murdie, Bill (Amy) Murdie, Karie Murdie and Kathy (Shawn) Claypool. He enjoyed with all of his heart, being together with Lynne and their 12 grandchildren, Avalon DeNecochea, Devon DeNecochea, Shane Brenton, Danielle (Aaron) Prysock, Darcy Shoemaker, David Shoemaker Jr., Alanna Murdie, Parker Murdie, Brendan Murdie, Ben Claypool, Will Claypool and Kate Claypool.

Bill was born in Detroit, Mich., to parents, Lloyd Marshall and Edna Ann Shoemaker. He will be buried in Almont, Mich., alongside his beloved sister, Carol Ann Shissler and their parents. Bill graduated from Fordson High School in 1957. In high school, Bill enjoyed history and socializing with his friends. He was active in his church basketball league. Bill was an avid fan of the Detroit Red Wings and the Detroit Tigers growing up. Bill was also in the Army National Guard, honorably discharged in 1958. After high school, he followed in his father, Lloyd’s, footsteps and went into teaching. He received his Bachelor of Science in Education from Eastern Michigan University in 1961 and his Master of Arts in 1966. He was active in his fraternity Phi Sigma Epsilon, inducted in 1958 and became president in 1961. He was a lifetime member of the Lambda Chapter Alumni Association. He kept in touch with his fraternity brothers for many years.

Bill’s first teaching position was at Redford Union teaching seventh thru ninth grade from 1961 to 1968. He became principal of Columbia Central Junior High School in Brooklyn, Mich., in 1968, and remained in that post until 1986. He then taught history and geography at Columbia Central High School until his retirement in 1995. Throughout his career, he also taught driver education during most summers. After retirement, he enjoyed being a Volunteer at Foote Health System in Jackson. He also occasionally served as a substitute teacher for a variety of grade levels.

Bill resided for many years at Lake Columbia in Brooklyn, Mich., raising his active family with Mary. During school breaks, he loved going on family vacations and visiting as many Civil War battlefields as possible between Michigan and Florida. Bill, an active member of the Brooklyn Kiwanis Club, was awarded both the Legion of Honor, for 30 years of service in Kiwanis, and the George F. Hixon award in 2019.

Bill was immensely proud of his children and grandchildren and always taught them to do what is right, “get something accomplished” and to be silly and have fun sometimes. Also, to value God, family, friends and community through his own actions of doing so throughout his life.

During his later years in life with his wife Lynne, Bill resided in both Leesburg, Fla. and Clarklake, Mich. He was very proud and supportive of his children and Lynne’s children. He loved the times he shared with Lynne watching their grandchildren compete in sports and other events all over the country. Bill and Lynne treasured their times with their family at Clark Lake. They also traveled together on three cruises to the Caribbean, traveled through the Panama Canal, traveled to Alaska and went on a Mississippi River Boat Cruise, which was his favorite. Bill touched many lives from his teaching days in Brooklyn, Mich., to his time in Leesburg, Fla., as a retiree.

He will be remembered as a loving man who was always curious and inquisitive, caring about others around him and wanting to know more about everyone he met. Bill has been described by many as a kind, caring and gentleman who loved his family very much. He never quit on life and was blessed to enjoy it with Lynne until the end, whistling as he walked, listening to the birds, viewing nature and living with a positive attitude every day. Bill will be greatly missed by all and now lives in heaven with God, joining his family and friends who preceded him.

The family plans to have a memorial service in Brooklyn, Mich., at a later date this summer. In lieu of flowers, donations may be given in memory of Bill Shoemaker to the Brooklyn Kiwanis Club Children’s Fund or the Brooklyn Presbyterian Church (160 N. Main St., P.O. Box 176, Brooklyn, MI 49230) are appreciated as both were so meaningful in his life.