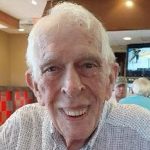 Wayne L. Shadbolt, 87, of Onsted, passed away peacefully on Saturday, February 27, 2021, in his son’s home surrounded by family. He was born on September 15, 1933, in Adrian to Victor and Bernice Shadbolt. Wayne married Teresa Marvin in Angola, Ind., on February 6, 1956, and she preceded him in death on Thursday, January 29, 2015. He proudly served his country in the United States Army.

Wayne was the owner and operator of Onsted Gulf Gas Station before retiring. He was a member of the Onsted American Legion and the St. Joseph Shrine. In his younger years, Wayne enjoyed roller skating. In his free time, Wayne enjoyed driving his red sports car, going to the Big Boy in Brooklyn and Tecumseh, and spending time at his cabin. Most of all Wayne enjoyed spending time with his family and friends especially his grandchildren and great-grandchildren. He often would gift children at the Big Boy in Brooklyn with a new box of crayons or stuffed animals.

Visitation for Wayne will be held on Wednesday, March 3, 2021, from 2 to 8 p.m. with a prayer vigil service at 7 p.m. at Anderson-Marry Funeral Home, Adrian. Due to the COVID-19 Pandemic and social distancing regulations, only a limited number of individuals will be allowed in the chapel at a time and face coverings are required. The funeral liturgy will be held on Thursday, March 4, 2021, at 11 a.m. at the St. Joseph Shrine, Brooklyn with visitation an hour before the Mass. Burial will be at a later date in the St. Joseph Shrine Cemetery, Brooklyn.

You may send condolences to the family at www.andersonfuneralservices.com. Memorial Contributions may be given to Hospice of Lenawee. Envelopes are available at Anderson-Marry Funeral Home, Adrian.