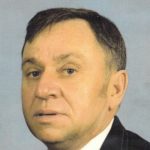 Vernon Ewing Vanover, of Cement City, went to be with his Lord on Thursday, February 14, 2019, at the age of 86. He was born in 1932 in Dorton, Ky, to Vernon Hershell and Delphia Greer Vanover who preceded him in death.

Vanover lived in Taylor, Mich., and Cement City for many years. He worked at Great Lakes Steel as an electrician. He was a driver for Holland Freight for many years. He was a devoted Mason. He served in the Army in 1952. Vern loved to tell stories of the crazy events of his life. He loved the Lord, he loved working on cars, and he left an impression everywhere he went.

Visitation was held on Tuesday, February 19 prior to the service at 11 a.m. Arrangements were handled by Chas. J. Burden Funeral Home, Jackson.