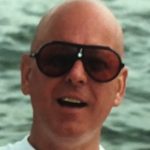 His legacy . . . Terrence Allan “Big T, Big Dog” Downs, 64, passed away October 21, 2019. He was born on October 15, 1955, in Detroit, Mich., to Geraldine Downs. He will be remembered as the “bald guy with the hotrod” that attended car shows with his T-bucket. Terry loved his family, his two dogs Lady and KC, and music. He was also a perfectionist as he was extremely punctual and had a routine that was never to be changed; to his children, he was Mr. Clean. Terry was into bodybuilding, Indy car racing, and most sports (if they were winning). He had a terrific sense of humor and quick wit. Terry truly enjoyed bonfires and will be missed by all who know and loved him.

His family . . . Terry will be missed by his two children, Nick and Terri; two brothers, Timothy Downs and Darryl (Janet) Downs; many nieces and nephews; Dustin Downs, Jeremy and Jason Downs, Don, Shawn, Charlene, and Steven Wright, Michael and Timothy Milbank, Dan and Chantel Rooney and Randy Rogers. He was preceded in death by his mother.

Rev. Jeff Sheeks will serve as celebrant. Memorial contributions may be given to the family for future designation. Please leave a message of comfort for Terry’s family at 877-231-7900 or sign his guestbook at www.borekjennings.com.