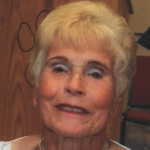 Susan E. Lowe, 84, of Tipton passed away on Sunday, August 29, 2021, at Henry Ford Allegiance Hospice in Jackson. She was born on September 19, 1936, in Franklin Township the daughter of Charles L. and Irma M. (Parlette) Armstrong. She was united in marriage at Tecumseh United Methodist Church to Merle R. Lowe of Morenci on June 19, 1954, and he preceded her in death. Susan loved the Lord and was a member of the New Song Church. She enjoyed vacationing, going to casinos, playing games, collecting Fenton glass and antiques, and was best known for the ice cream cakes she would make for family gatherings. Susan will be remembered by her family and friends for spreading her love and joy to all and the love she had for life and loved ones.

You may send condolences to the family at www.andersonfuneralservices.com. Memorial Contributions may be given to New Song Church or to Henry Ford Allegiance Hospice, Jackson. Envelopes are available at Anderson-Marry Funeral Home, Adrian.