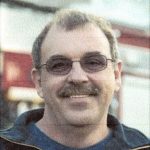 Steven Michael Todd, 63, of Liberty Township, Mich., passed away unexpectedly at home Tuesday, May 21, 2019. Born December 2, 1955 in Jackson, Mich., to the late William H. and A. Geraldine (Platt) Todd. Steve grew up in the Clarklake, Mich., area and was a 1974 graduate of Columbia Central High School. During his senior year Steve became a volunteer with the Columbia Township Fire Department before becoming a full-time firefighter and EMT with Summit Township Fire Department, retiring in 2017, after 30 years of service.

Cremation has already taken place, a memorial mass to honor Steve’s life will be held at St. Rita Catholic Church of Clarklake, August 17, 2019, at 1 p.m. Casual dress, as Steve would want everyone to be comfortable (just like his wedding day 22 years ago). The family will receive family and friends at the church from noon until service time.