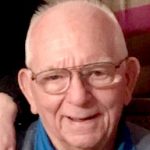 Doyle Blaine Masters, 83, of Jackson, Mich., passed from this life on August 16.

Doyle was born in Wright Township, Hillsdale County Michigan on December 21, 1935, to Blaine and Margarite Masters.

Doyle is survived by sons, Jeff (Erin) and John (Paula); their children and grandchildren; brother, Ray, and sister-in-law, Bonnie, and nieces, nephews and cousins.

He was preceded in death by his wife, and an infant daughter, Julie.

Doyle worked as a mechanic in the Jackson area from the late 1950’s until his move to Florida in the early 1980’s. He was a natural mechanic and enjoyed the challenges he tackled over many makes and models.

Next to Nancie, his second love was being on the golf course. He truly enjoyed his time with friends and did manage 3 holes-in-one over his many years and literally thousands of rounds.

Thanks to all the regulars at Sharp Park, for helping dad through all 18 during the last few seasons. Even Alzheimer’s never took his desire to chase the ball.

Goodbyes for dad will be a small family gathering at Floral Grove Cemetery in rural West Unity, Ohio.

And now, eternity has begun, and we know that is awesome for him.