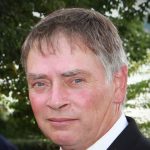 Steve was married to Deborah on July 25, 1970. They celebrated their 50th wedding anniversary with close family and friends in 2020.

After graduating from Hudson High School he served in the United States Army for two years at Fort Leonard Wood, Mo.

Steve worked at Tibb’s IGA for 41 years. In addition, he worked as a home builder with his good friend David Faling.

His hobbies included buying, restoring, and selling classic motorcycles. He held a pilot’s certificate and owned a Piper Tri-Pacer which he enjoyed flying with his late friend Harry Faling. He also enjoyed golfing with friends, was a member of the American Legion and in recent years enjoyed sharing his story about his time in the Army.

Military honors will be conducted at American Legion Post 180 (16113 Cadmus Road, Hudson, Mich.) on September 11 at 2 p.m. followed by a celebration of Steve’s life until 5 p.m.