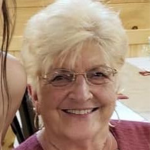 Dorothy was born Thursday, September 16, 1943, in Linton, Ind. She retired from Napoleon Community Schools as a secretary. Cremation has taken place. A visitation for family and friends to celebrate Dorothy and John’s lives will be held at Arthur-Day Funeral Home in Michigan Center on Friday, September 17, 2021, from 5 to 8 p.m. Contributions in her memory are directed to the Jackson County Animal Shelter (3370 Spring Arbor Road, Jackson, MI 49203). www.arthur-day.com.

Feel Free To Share
Subscribe today to our online and printed newspaper!
We offer the option to an online weekly paper, having it delivered, or both!
Subscribe Now
Copyright The Exponent - All Rights Reserved.
Designed by: Hawthorne Designs