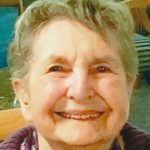 Shirley Ann “Scooter” Walsh, 87, of Brooklyn, passed away peacefully December 1, 2018, at the Henry Ford Allegiance Hospice Home after a brief illness. She is survived by seven children, twenty grandchildren, and twenty-six great-grandchildren along with her special friends at the Brooklyn Living Center (especially Arletta, Mary, and Maryanne) and the Norvell Township Senior Luncheons (especially Mary).

She was preceded in death by her daughter, Colleen; granddaughter, Lisa; sister, Carol; three brothers, Art, Bert and Bill and her parents, Chauncy Bertram and Leona Evelyn (maiden-Ferguson) Smeltzer. Shirley divorced in 1980 and lived happily ever after. She was born in Flint, Mich. on March 7, 1931; she graduated from Flint Tech in 1949, was employed by the Baia Corp., Hanimex and Sparton Corp. She enjoyed playing cards, crossword puzzles, trivia, oil painting, crocheting, sewing, needlepoint, paintball, camping and river tubing.

She was a long-standing member of the LMF Club and initiated many new members into the Honorary Turtle Club. She spent her last years at the Brooklyn Living Center where with her quick wit, mischievous humor, persistent smile, and generous nature, she made many friends.  She was beloved by many and will be missed by all.

Per her wishes cremation has taken place. A celebration of her life will be held at the Brooklyn Living Center (151 Constitution Ave, Brooklyn, Mich.) on Friday, December 14 at 6 p.m. with Chaplain Bart Hall (Henry Ford Allegiance Hospice) officiating. Visitation will be held from 5 p.m. until service time. Contributions in her memory may be made to the charity of the donor’s choice. In her own words; “I’ll see ya when I see ya.” Arrangements were handled by Arthur-Day Funeral Home, LLC, Michigan Center.