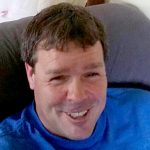 Scott was a genuinely good person who loved to make others laugh. When people think about Scott, we hope they remember his big smile, squinty eyes, and easy laugh. He had a huge heart and a way of making people feel comfortable in his presence. With a love for fun, he excelled at most things he tried. He was an amazing pool player and bowler, but, more than that, he brought out the joy in those close to him no matter the activity. He didn’t know his own value, and how very loved he was.

He was preceded in death by his parents, John and Catherine McKenzie; and his grandparents, Gordon and Catherine LaLonde. He is survived by his children, Mariah McKenzie, Matthew McKenzie, and Cierra McKenzie; and also his step-children, Ariel Robinson, Annie Gray, Emma Gray, and Dylan Gray; his sister, Susan McKenzie, and his brother, Tom McKenzie; his grandson Kahlan; and his nieces, Christy Karbousky (Joseph) and Cassy McKenzie; nephew, Josh Maddox (Kristen); and other family members.

He will be dearly missed. Memorial services are expected to be held at the end of August, details to be decided.