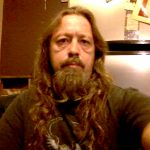 Robert William Yanakeff, 57, of Addison, passed away on Tuesday, September 24, 2019, at Michigan Medicine/University of Michigan Hospital in Ann Arbor.

He was born on January 4, 1962, in Highland Park, Mich., to Vasil William and Darlene Carol (Polikowsky) Yanakeff. Robert attended Ferndale and Addison Schools. He was a hippie at heart, and a man who lived life to the fullest. He enjoyed traveling, motorcycles, and concerts. His door was always open, and he loved to spend time with family and friends, a very free-spirited man.

Cremation will take place. A dinner will be held at 1 p.m. Saturday, October 5, 2019, at New Life Baptist Church in Addison with a bonfire later in the evening at Robert’s home.

Arrangements are entrusted to the Brown-Van Hemert Funeral Home in Addison. Send condolences to the family at www.brownvanhemert.com.