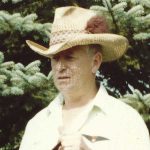 Robert T. Hudson, 87, of Norvell Township, passed away at his home Friday, September 25, 2020, under the loving care of his family and Elara Caring Hospice. He was preceded in death by his beloved wife, Geraldine (Kadwell) Hudson in 2013; parents, Ernest and Myrtle (Tuckerman) Hudson; and siblings, Jack, Herbert “Pete”, Sandra, Nancy, and Ernest “Bud” Hudson.

Bob grew up in the country around Gregory, Brooklyn, and Cement City and went to work at a young age. He went into the U.S. Marine Corps during Korea and was issued a bronze star and purple heart (which he refused saying someone deserved it more than him). He went on to work for United Vending Company in Jackson and then drove school bus for many years with the Columbia School District, a job he truly enjoyed. Bob was always a farmer at heart; he enjoyed his gardening and raising chickens, having horses, raising bluetick coonhounds and hunting birds, and small game. He also enjoyed camping and playing horseshoes, creating poems, and showing off his great sense of humor in his wonderful storytelling.

As was his request, cremation has taken place and a time of remembrance and fellowship will be held at Arthur-Day Funeral Home on Wednesday, October 21, 2020, from 3-6 p.m. Military honors will be presented by the Jackson County American Legion Ritual Team at 3 p.m.  Interment will take place at a later date at Hillcrest Memorial Park. For those who wish, contributions in Bob’s memory to Paws with a Cause would be appreciated.