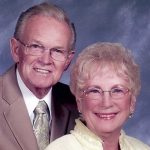 She was born on March 4, 1933 in Grand Haven, Mich., to Robert Abraham and Adrianna Elizabeth (Ippel) French. She married David Lowell Van Hemert on March 6, 1953 in Muskegon, Mich. He preceded her in death on May 28, 2016. Barbara was raised in Muskegon Heights, Mich., where she attended Muskegon Christian School. She then lived in the Addison-Hudson-Manitou Beach area for many years.

Burial was made in Green’s Lakeside Cemetery in Manitou Beach.  Visitation was from 2-4 and 6-8 p.m. on Saturday. Memorial contributions are suggested to the Hudson First United Methodist Church.  Send condolences to the family at brownvanhemert.com.

The Van Hemert family would like to thank the staff at Legacy Assisted Living Center and SouthernCare Hospice for the excellent care they gave to our mother.