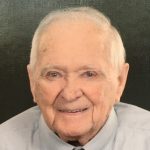 Richard Walter “Dick” Nichols, of Michigan Center, Mich., went home to be with his Lord and join his wife of 73 years, Phoebe, on Thursday, January 2, 2020, from his home under the loving care of his family and Henry Ford Allegiance Hospice. He was born April 26, 1924, in Napoleon, Mich., the son of Walter Carl and Lois Emily (Fraer) Nichols.

Dick honorably served his country as a proud Marine during WW II. He was the founder of Nichols Funeral Home in Michigan Center, which he opened in 1959 and retired from in 2015 at the age of 91. He and his wife, Phoebe, lovingly served the community of Michigan Center and the surrounding areas for many years, operating in their giftedness, of caring for families in their time of need.

A funeral mass to honor the life of Mr. Richard Walter “Dick” Nichols was held at Our Lady of Fatima Catholic Church in Michigan Center, on Monday, January 6 at 11 a.m. with Father Satheesh Alphonse officiating. At his request cremation followed the mass, and his remains along with Phoebe’s remains, will be placed in the Oak Grove Cemetery in Napoleon, at a later date. The family received friends for visitation at the Hampton Funeral Home in Jackson on Sunday from 2-8 p.m. Friends who wish may make memorial contributions to the Alzheimer’s Association or to Our Lady of Fatima Catholic Church. Please visit www.hamptonfuneralhomes.com to sign the guest book and/or send a condolence to the family.