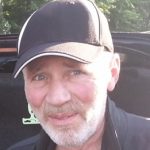 Louis D. “Pete” Thompson, J0r., 65, of Manitou Beach, passed away on Wednesday, January 1, 2020, at his home.  He was born on May 5, 1954, in Garden City, Mich., to Louis D. and Dorothy L. (Clevenger) Thompson, Sr. He married Lisa G. Cook on July 18, 1981, in Ann Arbor, and she survives. He lived his early life in Inkster and then in Livonia. He then moved to Manitou Beach in 1989. Pete graduated from Cherry Hill High School in Inkster in 1972. Pete was formerly employed as a Systems Analyst for Ford Motor Company for 35 years at various facilities. He retired in 2009. He liked cars and chasing after his grandchildren and cursing the Detroit Lions.

Surviving besides his wife, Lisa; is one son, Josh (Kd) Thompson of Ortonville, Mich.; three grandchildren, Lorraine, Wesley, and Anthony; three brothers, Keith Whittaker of Milan, Robert Thompson of Inkster, and Timothy (Laura) Thompson of Ludington; two sisters, Mary Studley of Indianapolis, Ind., and Joy; and nieces, nephews and cousins. He was preceded in death by his parents and one brother, James Thompson.

Cremation has taken place.  A celebration of life will be held at a later date.

Arrangements are entrusted to the Brown-Van Hemert Funeral Home in Onsted.

View this obituary and send condolences to the family at www.brownvanhemert.com