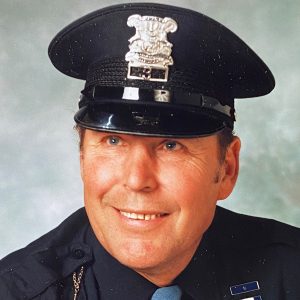 Raymond Francis Marchewitz, 88, passed away Tuesday, July 14, 2020. He was born on December 7, 1931, in Romeo, Mich., to Francis and Ila (Blumerick) Marchewitz. Ray was a State of Michigan champion swimmer and was a part of the 1950 class at Highland Park High and later attended Highland Community College. Ray was in the U.S. Navy for four years. Ray was employed as a Farmington Hills police officer for 27 years and a Highland Park officer for four years. Ray married Caroline Schaefer on July 27, 1991, in Greenmead Historical Village, Livonia, Mich.

Ray was a wonderful teacher and co-founder of the Schoolcraft College Police Training Department. He was an active member of St. Joseph Shrine Catholic Church, American Legion Wilbur Bartlett Post #315 in Brooklyn, Eagles of Irish Hills #3689, and the Brooklyn Moose Lodge #2651. He loved to golf, bowl, and enjoyed boating and hunting. He will be missed by all who knew and loved him.

Ray’s family and friends will gather Tuesday, July 21, 2020, from 5–8 p.m., with a Rosary at 7 p.m. at Eineder’s Borek Jennings Funeral Home, Brooklyn Chapel. Wednesday, July 22, 2020, at 11 a.m. his Funeral Mass will be held at St. Joseph Shrine Family Center, 8743 U.S. 12, Brooklyn, with visitation at 10 a.m. Fr. Jim McHugh, OSFS, will serve as celebrant. Memorial contributions are suggested to the American Heart Association – Great Lakes Chapter and Wounded Warrior Project. Please leave a message of comfort for Ray’s family or sign his guestbook at www.einederfuneralhomes.com.