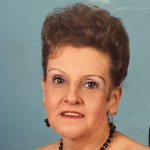 Patsy Dean Peterson died on, August 13, 2021, at home. She was born on July 9, 1947, in Detroit, Mich., to Jack O. Allen and Willodean (Robson) Allen. Patsy was a nurse’s aide and was a certified nursing assistant (CAN). Patsy was involved with the Eastern Star, enjoyed traveling with her husband. Known to always remember everyone’s birthday with a card and her signature, which always included a smiley face. Most importantly, she always made sure her baby brother was taken care of. She was truly always happy. Enjoyed oil painting and many crafts in her spare time, was an avid gardener and was a true artist.