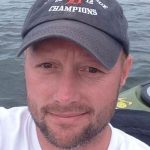 Chad Lee Stahl was born on December 14, 1974, and was received into Heaven on August 20, 2021. He is survived by his wife, Amy Stahl; two daughters, Emily and Erin Prater; and loyal companion Deacon. Chad was the son of Barry (Deb) Stahl and Penny (Brad) Bibbins who also survive as well as many sisters and brothers; nieces and nephews. He was preceded in death by grandma Yother, grandpa Bibbins, and his brother, Blake.

Chad graduated from Columbia Central High School in 1993, then, earned his undergraduate degree at the State University of New York at Oswego and master’s degree at Phoenix University. Chad enjoyed the outdoors, such as kayaking, hunting, fishing, and catching beautiful women such as Amy! He enjoyed volunteering at Cross Point Church in Nashville when he lived in Tennessee. After leaving the Army, he went on to a career with Lendlease working on renovating military housing, first as a project manager then as safety director where he worked with OSHA compliance. He most recently retired from Harvest Solar in Jackson.

Visitation will be held at Arthur-Day Funeral Home in Michigan Center on Friday, August 27, 2021, from 2 to 4 p.m. and 6 to 8 p.m. Funeral Services to honor Chad’s life will be held at Cement City Baptist Church, 16788 Cement City Road, on Saturday, August 28, 2021, at 11 a.m. with Pastor Drew Woods officiating. Visitation at the church will begin at 10 a.m. Saturday. Interment with military honors at Oak Grove Cemetery in Napoleon will follow the church services.

Chad’s family would like to thank the staff of Heartland Hospice as well as dear friends Jay Compton and Peggy Mead for all of their help and care these last months and for being at his side with family on Friday.

For those who wish, contributions may be made in Chad’s memory to ALS of Michigan (Lou Gehrig’s disease), 24359 Northwestern Hwy., Suite 100, Southfield, MI  48075 (www.alsofmichigan.org). (www.arthur-day.com)