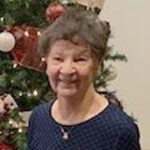 Patricia was a graduate of Chadsey High School in Detroit, Mich., and attended Wayne State University. She was employed in the Dearborn Public Schools prior to her retirement in December 1997. During retirement, she was an active member of St. Rita’s Catholic Church where she had been a Eucharistic Minister, attended Bible Study every Sunday, and volunteered by preparing Thanksgiving baskets for families. She was also a member of the Newcomer’s Club where she served as secretary. She enjoyed dining out and playing cards with her euchre and pinochle groups. Her greatest joy was spending time with her family.

Patricia always looked forward to everyone coming to her home on Lake Columbia in the summer and little did we know that a pontoon ride in September with her family would have been her last ride around the lake.

The family will receive friends on Saturday, December 5 at 10 a.m. until the funeral mass at 11 a.m. at St. Rita Catholic Church, 10516 Hayes Road, Clarklake, MI 49234. In lieu of flowers, donations may be made to St. Rita’s Catholic Church.

Please leave a message of comfort for Patricia’s family or sign her guestbook at www.EinederFuneralHomes.com.