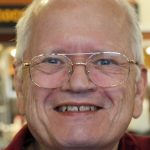 On Monday morning, April 15, 2019, Pastor Gregory Ryan Wolfe, 71, saw the sun break through, and the brilliance of the Son of God win victory over pancreatic cancer, when He took him to his forever home to spend eternity with his Lord and Savior. Greg was surrounded by his loving family, who with Heartland Hospice, cared for him briefly at home. He was overlooking the water, always his place of peace and contentment, whether swimming, boating, skiing, or teaching others to do those things. Greg was preceded in death by his grandparents, Earl and Tessie Wolfe; father, Lowell Wolfe; brother-in-law, Russ File; nephew, Rusty File; sister-in-law, Sharon (Taylor) LaLonde, and father-in-law, Joe Taylor. Greg is survived by his wife of 46 years, Sue; children, David (Christina) Wolfe, of Indiana, Aimee (Steve) Reasoner of Kalamazoo, and Bethany (Jon) Steele of Aviano AFB, Italy; grandchildren, Patrick and Kyle Wolfe; Katey, Abby, James, Lexie, and Isaac Reasoner; his grand-dogs, Pixie and Goose Steele; and Skittles his cat, whom he pretended not to like. Greg is also survived by his mother, Betty; sister, Debby File; his favorite (and only) niece, Becky (Aaron) Moodie; great niece and nephew, Lindsey and Lance Moodie; as well as his mother-in-law, Marilyn Taylor; special cousins, Vicki (Hubbard) Winchester and Jim Hubbard, and his adopted big brother, Bud Freysinger.

As a result of the pulpit exchange, Greg is now also survived by his English son, Karl (‘Fliss) Boggis, English daughter, Nicky (Zahid) Hassan whose weddings he was blessed to participate in, and English grandchildren, Harry and Jacob Boggis, and Dayan and Anees Hassan. Greg was born to Lowell and Betty (Sarver) Wolfe and older sister Debby, on February 10, 1948, in Battle Creek, Mich.

He graduated from Battle Creek Central in 1966. Greg married his prom date, his sweetie, Sue (Susan) Taylor on March 17, 1973. They loved their way through 46 years of marriage, but dated for ten years, making it 56 years together. Greg began his education at Kellogg Community College, went on to Morningside College graduating in 1970. He then went on to pursue his Master of Divinity at Candler School of Theology at Emory University in 1973. He served 40 years in six full time appointments in the West Michigan Conference of the United Methodist Church, and six years part time during his retirement. He chaired, and served on, many district and conference boards and committees over the years. Greg’s passion was in leadership development and small group ministries, evident in the numerous times he was a leader at church camps, Emmaus Walks, DeColores Weekends, and as an active member of the Ministerial Association wherever he was serving.

In 1989, the family did a pulpit exchange in West Yorkshire, England, with Rev. Malcolm Guest and family, connecting deeply with the people there, resulting in enduring friendships, and the additions of extended family, as well as many visits back and forth across the pond. Greg grew up with music; singing, playing upright bass with his family, for organizations, and in churches his entire life. He enjoyed attending his own children’s concerts and sporting events, and more recently, those of his grandchildren. Greg and Sue loved to travel, and Greg had a gift for planning trips for the family, as well as for friends, and groups of friends, who came to explore parts of our beautiful state and country. Greg was highly competitive in many areas: cards, particularly Euchre, games like Monopoly, pool, and cribbage, showing no mercy – not even to the kids. When losing, the whining began: ask anyone.

Greg walked his talk and touched the lives of so many, and he will be greatly missed by all who knew and loved him. He is gone from our sight, but never our memories. Gone from our touch, but never our hearts. A memorial service will be held at a later date, once military family can return home. In lieu of flowers, memorial contributions may be made to a United Methodist Church of your choice, or to papasministries.org. Please sign Greg’s guestbook at www.sherwoodfh.com.