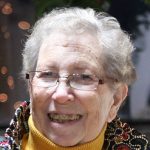 Born on May 26, 1935, to Glenn and Ethel Miller; Nancy was a graduate of Vassar High School and attended Michigan State College where she met Bob. They were married in 1955. They lived for many years in Jonesville where Nancy was active as a Girl Scout leader, Sunday School teacher, served on the Library Board, member of the Culture Club and room mother extraordinaire.

After moving to Napoleon, Nancy held many positions in the Napoleon School System ending her career as the secretary at the Middle School. Nancy was active in the Napoleon Band Boosters, working concessions for many years; Past Worthy Matron of Napoleon Chapter #328 Order of the Eastern Star (now Fern Leaf #66); and longtime member of the Napoleon United Methodist Church.

Cremation has taken place.  Since we cannot be together at this time, please leave a memory of Nancy that will be shared when we are able to celebrate her life safely. Memorial contributions can be made to the Napoleon branch of the Jackson District Library P.O. Box 476, Napoleon, MI 49261 or the Napoleon United Methodist Women (P.O. Box 337, Napoleon, MI 49261). Arrangements in care of Arthur-Day Funeral Home, Michigan Center, MI (www.arthur-day.com).