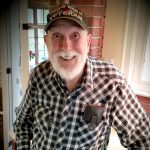 Murray left school to join the Navy during World War II. He married Donna (deceased) in 1948. Murray was a meat cutter with Kroger’s.  He was an artist and enjoyed snow skiing, sailing, antique cars and model railroading.

Graveside military honors will be held on Saturday, October 19, 2019, at 11 a.m., at Maple Shade Cemetery in Onsted under the direction of the Onsted American Legion, Durkee-Seager Post #550 followed by a celebration of life at the Onsted American Legion Hall. Memorial contributions may be made to The Salvation Army or Lenawee Dept. Of Aging. Arrangements have been entrusted to Dunn Chapel, Brown-Van Hemert Funeral Home in Onsted. Condolences and words of comfort can be left at www.brownvanhemert.com.