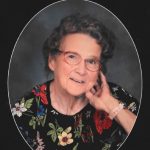 She was born November 24, 1945, in Adrian, to Dale and Myrtle (Powers) Dunbar.  She was married to John King on May 23, 1964, and he preceded her in death. Jayne had been the head cook at Lenawee Medical Care Facility, retiring in 2006. She enjoyed spoiling her grandchildren and doing crafts. She was a member of the Jasper Bible Church.

Jayne is survived by a daughter, Penny King of Adrian; two sons, John (Annette) King Jr. of Onsted and Donald King of Adrian; five grandchildren, Randy, Justin, Shane, Amanda, and Cassidy; 10 great-grandchildren; and three sisters, Alice (Steve) Bloomer of Somerset, Mich., Ruth (Leon) Willgus of Somerset, and Bonnie Rickard of Adrian. In addition to her husband, John, she was preceded in death by her parents and a brother, Donald Dunbar.

Condolences may be sent to the family at andersonfuneralservices.com. Memorial contributions may be made to the Lenawee Humane Society. Envelopes are available at the Anderson-Marry Funeral Home, Adrian.