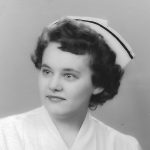 Mary E. Iveson, 90, of Lake Somerset, Cement City, formerly of Addison, passed away on Wednesday, June 26, 2019, at her home at Lake Somerset.

She was born on December 14, 1928, in Metamora, Ohio, to Raymond and Viola (Downing) Wotring. She married Robert W. Iveson in 1956 in Mason, Mich., and he preceded her in death on December 24, 2002. Mary lived in the Addison area for many years. She graduated from Whitmer High School in 1945 and then graduated from Toledo School of Nursing in 1948. Mary worked at several hospitals in the area, including the former Addison Community Hospital, Thorn Hospital in Hudson and Foote Hospital in Jackson, and she retired in 1985. She attended Central Christian Church. She enjoyed traveling, reading, shopping, spending time with friends and family and loved animals. She was a member of the Humane Society and ASPCA.

Cremation has taken place. There will be no services. Memorial contributions are suggested to Great Lakes Hospice of Jackson or to New Life Baptist Church of Addison. Arrangements are entrusted to the Brown-Van Hemert Funeral Home in Addison.