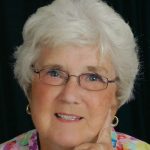 Marilyn “Maime” Bingman, 92, of Brooklyn, formerly of the Stryker, Ohio area, passed away on Friday, December 6, 2019, at Henry Ford Allegiance Hospice Home in Jackson. She was born on April 24, 1927, in McComb, Ohio, the daughter of Vernon L. and Frances M. (Fouts) Buehrer. Maime graduated from Stryker High School in 1945. She was a hard worker, did some crocheting, but preferred the outdoors taking care of her yard, boating, spending time with family and friends at the lake and traveling to her place in Cancun.

Maime enjoyed watching basketball, especially the Pistons and Duke. She was a member of the Lutheran Church of the Lakes in Addison. Maime retired from Aro of Bryan, Ohio, after many years as a bookkeeper.

Surviving Marilyn, is her daughter, Pam Guthrie of Brooklyn; ex-husband, Walt “Tug” Guthrie of Stryker; nephews, Mark (Karen) Crommer of Brooklyn and Matt (Sandy) Crommer of Waldron; nieces, Debbie Carpenter of Jackson and Linda Cooper of Stryker; great nephew, Andrew of Grand Rapids and many other extended family members. She was preceded in death by her husband, Elvin “Bing” Bingman; her son, Patrick Guthrie; her parents; her sister, Sue Newton; her brother, Paul Buehrer; and half-brother, William Leupp.

Funeral Services for Marilyn will be held at 11 a.m. Thursday, December 12, 2019, at the Lutheran Church of the Lakes in Addison with Pastor Tyson Bentz officiating. Interment will follow at 2:30 p.m. at Evansport Cemetery in Evansport, Ohio. Visitation will be held at the church from 9 a.m. until time of service on Thursday. Memorials are suggested to Lutheran Church of the Lakes or Henry Ford Allegiance Hospice of Jackson. Envelopes will be available at the funeral home. Arrangements have been entrusted to Dunn Chapel, Brown-Van Hemert Funeral Home of Onsted. Send condolences and messages of comfort to the family at www.brownvanhemet.com