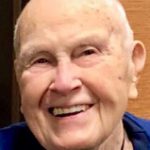 Don was a graduate of Hudson High School Class of 1945, he served in the U.S. Navy during WW II, and was owner and president of M & S Manufacturing and MS Sales in Hudson for over a span of 45 years. He was a member of the Hudson First Congregational Church, Devils Lake Yacht Club, Hudson American Legion Hannan Colvin Post #180, past member of Lenawee Country Club and served on the board of directors for Hudson State Savings Bank. His favorite past times were lunches with the firemen, traveling to northern Michigan to spend time at his cabin and to snowmobile with his family. Don also enjoyed supporting many local endeavors through the Murdock Foundation he established.

In addition to his parents and wife, Marcia Jean he was preceded in death by a son, Donald L. (Mike) Murdock Jr.

A memorial service with military honors for Don will be at the Hudson First Congregational Church on Saturday, January 18, 2020, at 11 a.m. Dr. Rev. Thomas Burke officiating. A luncheon will be provided for family and friends immediately after the memorial service at the Hudson American Legion. The family will receive friends for a visitation on Friday from 2-7 p.m. at the Eagle Funeral Home in Hudson.

Memorial contributions to honor Don may be made to Hudson First Congregational Church or to Hospice of Lenawee. Friends can share memories and words of comfort with the family online at www.eaglefuneralhomes.com.