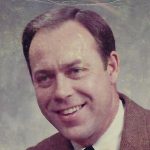 Judson Douglas Austin was born on June 23, 1930, in a house on Main Street and died just 100 yards away on Tecumseh Street on February 3, 2020, surrounded by his family. (Yes, he lived his entire life within the same block of Brooklyn, Mich.) Jud served in the United States Army during the Korean War, worked as a barber for ten years in Jackson and raced horses both locally and around the country. He was a member of the Michigan Harness Horseman’s Association and the United States Trotting Association.

Jud was preceded in death by his parents N.D. and Frances. He is survived by his wife of 69 years, Joan Austin; three children, Mike (Debbi), Karen Sproul (Dave), and Matt (Julie); six grandchildren; five great-grandchildren, and four beloved guitars.

In addition to his passion for racing horses, Jud’s hobbies included following his son’s football officiating career, complaining about his high tech TV, giving his grandson’s haircuts at the end of every visit, and listening to country singers so obscure his family members in Kentucky didn’t even recognize them. He could repair just about anything in his workshop – a skill he handed down to two out of three children.

Jud decided long before his battle with cancer he didn’t want people standing around talking about him, so his family will take this opportunity to thank everyone for their thoughts and prayers. He truly was a good man and will be greatly missed.

Please leave a message of comfort for Jud’s family at 877-231-7900, or you can sign his guestbook at www.borekjennings.com.