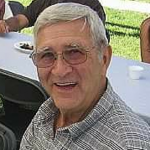 He was born on April 12, 1934, in Addison, Mich. to Clare and Ethel (Church) Jackson. He married Alice Marie Hamblin on July 10, 1954, in Kentucky, and she preceded him in death on July 4, 2015. Keith lived his early life in Addison and later moved to the Vandercook Lake area.

He then moved to the Jerome area in 1970, and he wintered in Tavares, Fla. Keith attended Addison Schools. He was a Union Carpenter and Plasterer. He was employed at Goodrich Construction in Adrian and also at various construction companies and he built many homes in the area. He also worked at Shively-Bouma of Jackson, and he retired from Krieghoff of Lenawee. Keith enjoyed car shows and having his own Model T car in parades. He enjoyed restoring tractors and playing around his yard with his tractors. He was a Merchant Marine of the Great Lakes.

Cremation has taken place. Memorial Services will be held at 1 p.m. Saturday, December 9, 2017, at the Brown-Van Hemert Funeral Home in Addison, with Pastor David Luke officiating. Visitation will be from 6-8 p.m. on Friday, December 8, 2017, and from noon Saturday until the time of the service. Burial of his ashes will take place at Hillside Cemetery in Addison.

Feel Free To Share
Subscribe today to our online and printed newspaper!
We offer the option to an online weekly paper, having it delivered, or both!
Subscribe Now
Copyright The Exponent - All Rights Reserved.
Designed by: Hawthorne Designs