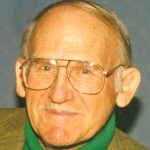 After an amazing and long life, Liberty Township resident James Wesley Smith passed away Sunday, June 30, 2019, under the loving care of his family and the wonderful staff at Henry Ford Allegiance Hospice Home. Wes was 95 years old, born September 9, 1923. He was a fifth-generation farmer at the same Liberty Township farm, homesteaded by ancestors in 1835. In 1941, he graduated from Cement City Schools.

He started work at the Brooklyn Ford Motor plant in 1949, and was employed by the company for three decades, retiring in 1980. After leaving the auto industry, he continued farming for two more decades. Wes loved to spend time with family, friends, hunt, fish, and practically anything else that connected him with people and nature. Wes’ hobbies included cross country skiing, reading, and anything to do with airplanes. On his eightieth birthday he went skydiving with five of his grandchildren. Wes and his wife traveled extensively and spent many summers in the Upper Peninsula at the Smith cabin. Wes often had his camera in hand and gifted hundreds of great photos to family and friends. He was a lifelong member of the Unitarian Universalist Church of East Liberty, as were five generations of his Liberty township family before him.

Wes was preceded in death by his parents, Willis and Clarissa (Dubois) Smith, and sisters, Frances Schafer and Margaret Johns.

His family and friends will miss Wes’ friendly, warm, and compassionate nature, along with his loving hugs, and his unfailing memory that served up wonderfully detailed stories from the past.

Cremation has taken place and a service to celebrate his life will be held at the New Jerusalem Christian Fellowship Church, 14977 Harper Road, Cement City, MI 49233 at U.S. 127 and Harper Road, on Saturday, July 13, 2019, at noon. Friends and family will gather at 10 a.m. for visitation, and a luncheon will follow the service. For those who wish, contributions in Wes’ memory to the American Cancer Society, the Wounded Warrior Project and Farm Aid would be appreciated. Cremation arrangements were under the care of Arthur-Day Funeral Home, Michigan Center, www.arthur-day.com.