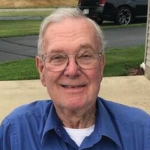 James Lewis Hubbard, of Onsted, passed in peace on August 26, 2021, at Hospice of Lenawee.  He was born on August 14, 1931, in Adrian, Mich., to Leland and Stella Hubbard. On June 15, 1952, he married Frances Jeanne Weitenhagen in Adrian. Jim was a member of St. Mark’s Lutheran Church for over 55 years, where he served faithfully as congregation president and elder. Jim also attended St John’s Lutheran Church in Adrian for the past 10 years. He was a member of the Irish Hills Lions club where he served as chapter president and deputy district governor. Jim was also a member of the Onsted Kiwanis Club serving as president and co-chairman of the annual Show Car Nationals. Jim also donated his time to the 4-H Club, Boy Scouts, and Onsted PTSO.

Jim’s biggest passion was his wife Fran of 67 years as she was the love of his life, and the time he was able to spend with his family and friends, children, grandchildren, great-grandchildren, and his countless friends in his 90 years. Jim’s career was spent as owner-operator of Hubbard Apiaries, along with his brother Richard Hubbard, and brother-in-law Ernie Groeb. Upon his retirement, Jim and Fran opened the Country Workshop at their home in Springville creating crafts and furniture to display at craft shows across the Midwest.

At Jim’s request cremation has taken place. A visitation will be held at the Anderson-Marry Funeral Home, Adrian, Wednesday. September 1, from 3 to 8 p.m.

You may send condolences to the family at www.andersonfuneralservices.com. Memorial contributions may be made to St. John’s Lutheran Church of Adrian, Mich.; or Hospice of Lenawee and envelopes are available at the Anderson-Marry Funeral Home, Adrian.