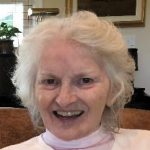 Illa Jeanette (Holdridge) Jessup entered the eternal presence of her savior, Jesus Christ, on Saturday, July 27, 2019.  Born in Jackson, Mich., on September 15, 1940, she was the fifth child of Irene (Mayer) Holdridge and Lester Holdridge.

She met the love of her life, Larry Jessup, in the youth group at Jackson Gospel Tabernacle (now Lansing Avenue Baptist Church), where they both heard the gospel of Jesus Christ and first trusted in him as savior.  They married on February 13, 1960 and enjoyed nearly 60 years as husband and wife.

Her orderly ingenuity and managing skills added greatly to the success of the family business, Jessup Vending.  (Observing the business operating after it was sold, her father-in-law commented that it took seven men to replace her!)  After moving to Florida in 1984, she worked for the Manatee County Tax Collector’s office as a faithful assistant to Ken Burton Jr. for 10 years until her retirement in 2000.

Illa had a tremendous gift for making the celebrations of her loved ones meaningful with her cooking and baking and could pull a party out of the refrigerator at a moment’s notice.  She had a tender admiration for babies and added warmth and beauty to their lives with knitted and crocheted gifts.  She loved beautiful art, bird watching, time with grandchildren, and coaching her Larry through his monologue recitations. She served with the sound crew and helped count offerings at her church, Trinity Baptist in Sun City Center, Fla.

Visitation was held at Groover Funeral Home in Ellenton, Fla., on Thursday, August 1st, 2019.  There was a funeral for family later in the week with Rev. Joseph Mimbs officiating. In lieu of flowers, contributions may be made to Samaritan’s Purse  at samaritanspurse.org.