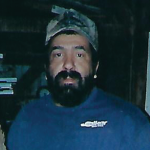 He was born on July 7, 1962, in Tecumseh, Mich., to Vernon and Henrietta (Christman) Jones. Howard married the love of his life, Carol Sharp, on June 28, 1997, in Tecumseh, Mich. He will be remembered for his big heart. Howard was an avid sportsman, hunting, fishing, and camping. He attended the annual family gatherings in Sears, Mich. Howard enjoyed mud bogging and building his own vehicle to use. He retired after 20 years, from AMI Manchester Stamping. Howard was incredibly hard working and he would do anything for anyone. He especially loved spending time with his family. Howard was a loving husband, father, grandfather, and great-grandfather. He will be missed by all who knew and loved him.

Howard is survived by his wife, Carol; his children, Nathan (Brittany) Jones, Eric (Lynda) Jones (Shepard) and Becky Shepard; four sisters, and four brothers; ten grandchildren; and 13 great-grandchildren; many nieces and nephews; a brother-in-law and a special nephew. He was preceded in death by parents, one sister and two brothers.

Memorial contributions are suggested to the American Cancer Society. Please leave a message of comfort for Howard’s family or sign his guestbook at www.EinederFuneralHomes.com.