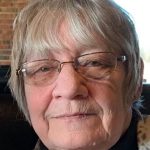 She is the daughter of Lyle Beck and Carolyn Pierce and was born on September 6, 1950. She grew up and went to school in Michigan Center. Soon after graduating from Michigan Center High School in 1968, she met William Bailey of Munith. He was on leave from Vietnam, and they were married upon his return. Together they had three children.

Dianne worked several years at the “Stop & Shop” across from the Michigan Center boat launch. She was a friendly face to many in the community. Dianne enjoyed chatting with folks who stopped by for a quick lunch, kids walking to school and even the kids skipping class to drop a few quarters in the arcade outback.

Later, Dianne moved to the Brooklyn area, where she worked at Country Market until retiring in 2017. She was a member of the Irish Hills Fraternal Order of Eagles, where she enjoyed socializing and helping to organize special events and holiday dinners. At the Fraternal Order of Eagles, she met Gilbert “Gil” Porterfield. They were married in 2010 and remained so until his death in 2014.

Memorial contributions are suggested to the American Cancer Society.  Please leave a message of comfort for Dianne’s family or sign her guestbook at www.EinederFuneralHomes.com.