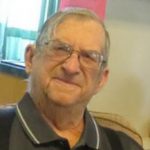 No services are scheduled at this time. McEvoy Funeral Home is handling the arrangements.

He was married June 10, 1950, to Phyllis Ray Smith of Springville and she survives.

In addition to his wife, he is also survived by three daughters, Jean (Albert) Barone and Vicki (Leo) Davis, both of Springville and Cathy Carr of Clarklake, Mich.; two sons, William (Tina) Smith and Phillip (Tami Tilden) Smith, both of Jackson, Mich.; two sisters, Geraldine Furman of Houston, Texas, and Gladys Dennis of Michigan Center, Mich.; and many grandchildren; great-grandchildren and great-great-grandchildren.

In addition to his parents, he was also preceded in death by a daughter, Wrayetta M. Harvel; a sister, Opal Halm; and four brothers, Loyal, Robert, David “Wrae” and Carl Smith.

Smith loved to hunt and fish, according to his family, his celebration of life started in July and continued in August when his children and grandchildren came in from eight states.

A service for family and friends will be held on Wednesday, June 12 at the Eagles Lodge, 302 5th Street in Michigan Center, from 4-7 p.m.