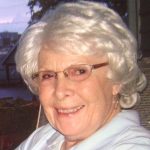 Georgia Jennette Parkhurst of Brooklyn, formerly of Addison and Manitou Beach, passed away on Saturday, October 3, 2020 at Lenawee Medical Care Facility in Adrian.

She was born on August 14, 1924 in Addison, Mich., to Miles C. and Gladys J. (White) Hudnutt. She married Edwin C. Parkhurst on August 14, 1948 in Manitou Beach. He preceded her in death on January 24, 2005. Georgia lived in the Addison-Manitou Beach area most of her life. Her last three years were spent at the Brooklyn Living Center. She graduated from Addison High School in 1943. She was a registered nurse, working at Addison Hospital for several years and later worked at Lynwood Manor (Hillhaven) in Adrian where she retired.

Georgia attended church faithfully throughout her life. Her family is comforted knowing that because of her strong faith and love of Jesus she now resides with Him. She most recently attended Cornerstone Community Church in Brooklyn.

Georgia was very social and had many friends, always seeing the good in everyone. She enjoyed music and loved going to the Gospel Barn. Georgia enjoyed knitting- many new mothers were delighted with beautiful baby sweaters. She often made delicious cookies, cream puffs, the world’s best potato salad, and strawberry shortcake for her family and friends.

Send condolences to the family at www.brownvanhemert.com. Memorial contributions may be made to Youth Haven (www.youthhaven.org) in Rives Junction, Mich.