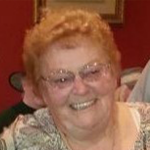 Doris immigrated to America at the age of 17 and settled in Brooklyn, Mich., along with her parents and younger brother Donald Rimmer. She became an American citizen at the age of 23. She was a proud American! She worked at The Spot restaurant in Brooklyn where she met her future husband Jerry Morris DuBois of Cement City, whom she would marry on June 14, 1952. Together they had four children, David, Dale, Michael, and Deborah. Doris’ husband Morris passed away on September 24, 1974, after a long illness.

She worked and supported her family for years, and eventually married a second time to Oscar Wyatt in 1981. Oscar then passed away on August 24, 1988. She lived most of her life in Cement City and continued working at Spartan Electronics in Jackson until 2009 when she finally retired at the age of 76.

She moved to Tucson, Ariz., in 2016 to be near her daughter Deborah and to escape the cold Michigan winters. Doris was a very generous and giving person. She would learn of someone in need, and she would want to help. She attended Cement City Baptist Church and Bethany Assembly of God in Adrian, Mich. She was a Cub Scout Den-Mother as well as a Brownie and Girl Scout leader. She loved her children and their friends, and many of those children would call her “Mama D”. She was also a dog lover and had many dogs over the years. She loved them and treated them as part of the family. She always had kind thoughts and words for people, and she will be greatly missed.

Doris is survived by two children, David (Sharon) DuBois of Jackson Mich., and Deborah (Ben) Labo of Tucson, Ariz.; as well as two granddaughters, Allison (Joshua) Yeiter and Andrea (Sean) Bertolino; five step-grandchildren, three great-grandchildren, and 16 step-great-grandchildren. She was preceded in death by both of her husband’s, Jerry Morris DuBois and Oscar Wyatt; five siblings – Lillian, Jenny, Keith, Dennis, and Donald; her two sons, Dale DuBois and Michael DuBois and special step-granddaughter in love, Jeanah Turner. There will be a memorial service on Saturday, Sep. 11, 2021, from 10 a.m. to noon at Abundant Life Assembly of God, 130 S. Main St., Brooklyn MI 49230. The service will be recorded for anyone who is not able to attend or does not feel comfortable attending in person