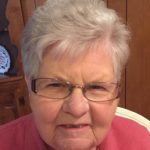 Doris Jean Hawes, 92, of Manitou Beach, passed away on Saturday, November 9, 2019, at Senior Moments Assisted Living in Jackson. She was born on May 8, 1927, in Addison, Mich., to Leonard M. and Helen I. (Hague) Wheaton. She married Dale W. Hawes on October 3, 1947, in Toledo, Ohio, and he preceded her in death on January 21, 2008. Doris lived in the Addison-Manitou Beach area for the many years. She graduated from Addison High School in 1946. She retired from Faraday Inc. in Tecumseh after working there for many years. Doris was a member of the North Rome Baptist Church in Manitou Beach where she was a member of TOPS. She was also a member of the YMCA until she was 87 years old.

Funeral Services will be held at 2 p.m. Thursday, November 14, 2019, at the Brown-Van Hemert Funeral Home in Addison, with Pastor Fritz Kruse officiating. The visitation will be from 11 a.m. until the time of the service on Thursday. Cremation will follow the service. Memorial contributions are suggested to the Alzheimer’s Association. “A special thank you to Senior Moments Assisted Living for the exceptional and loving care they gave to mom this past year.”