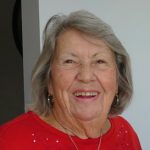 Donna leaves behind thirteen grandchildren and seventeen great-grandchildren, as well as one sister, Carmen Griffin of Madison, Ga. She was preceded in death by her husband of 72 years, Leonard E. Leonard, “Bud” on June 27, 2019, her parents, Earnest B. and Ruth E. (Lantz) Gerig and one daughter, Margaret (Peggy). Donna was born on May 5, 1927 in Smithville, Ohio.

She lived her early years in Toledo, graduating from Libby High School. She married Bud on January 18, 1947, in Toledo, Ohio. For a very short time they lived in Blissfield, Mich., and eventually they settled down in their historic brick home on the south shore of Round Lake, raising their family there from 1954 to 1989.

During those years, Donna helped in the operation of Leonard Amusement Company & Vending in Adrian, Mich. which has now become a third-generation business. In 1989, she and Bud moved to Stuart, Fla. finally retiring to Freeport, Bahamas where they enjoyed many years of sunshine with good friends and family visits. In addition to playing the piano, Donna was one of the original organists at St. Mary’s on the Lake at Manitou Beach. One of her favorite hymns was God of our Fathers. She was an avid reader, a life-long learner, enjoying discussions of books of substance. She had a voracious appetite for crossword puzzles and always looked forward to the newspaper arriving with a new challenge.

Cremation has taken place. A private family graveside service will take place in Green’s Lakeside Cemetery in Manitou Beach. Friends and family are invited to a celebration of life for both Donna and Bud on Saturday, October 12, 2019, at Boot Jack Tavern, 735 Manitou Road, Manitou Beach, Mich., from 2-4 p.m. Arrangements are entrusted to the Brown-Van Hemert Funeral Home in Addison. Memorial contributions may be made to the American Heart Association. Send condolences to the family at www.brownvanhemert.com.