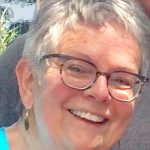 Deanna was born on September 11, 1948, to Patricia and Walter Burke in Addison, Mich. She was the eldest of seven daughters, and as such, took her role seriously as “mother’s helper.” As a child, she loved reading, church activities, playing on the farm, riding her stubborn Shetland pony, Dynamite, and participating in 4-H and Girl Scouts. In high school she was a Youth for Understanding exchange student to Sweden and enjoyed staying in touch with her host family, as well as numerous family exchange students. After graduating from Addison High School in 1966, Deanna left her hometown and moved to Holland, Mich. To attend Hope College. At Hope she majored in elementary education. It was also where she met Michael Hansen, a handsome physics major and the tow hit it off. They were married June 20i, 1971, in a beautiful outdoor ceremony on the shores of Lake Michigan at the historic Getz Farm.

After graduating from Hope College in 1970, Deanna was excited to begin her first teaching job at Muskego Heights Public Schools, teaching kindergarten and second grade for ten years at Martin Luther King Elementary. AS a young couple, Deanna and Michael traveled often and far. When their children came along, she then took a break from teaching to be a full-time mother, a job she cherished. She raised their three children and for many years cared for Michael through a very long illness. Through all of this she was strong, compassionate, and always put others first. After Michael became ill, Deanna went back to work as a librarian, and then as a teacher, for Rose Park Elementary of the Holland Christian School District in Holland, Mich., the school where her children attended. Always a lover of books, she went back to school and earned her Master’s Degree in Education and Library Science from Wayne State University. Deanna worked at Rose Park Christian Elementary School for three decades and taught 2nd, 3rd, and 4th grades before eventually retiring in 2012. Her passion for literacy and education and her genuine love for each and every one of her students was always evident. After her retirement, Deanna used her newfound free time to care for and enrich the lives of her parents, sisters, children and grandchildren.

Deanna was well loved and her positive energy and enthusiasm for life will be remembered not only by her friends and family, but also by her community and by the hundreds of students whose lives she touched over her four decades of the teaching. She will be cremated and buried next to Michael in Holland. A private family celebration of her life will take place at a later date. In lieu of flowers, donations may be made in her honor to the public library.

Please visit www.lakeshorememorial.com to leave a message or memory for the Hansen family.