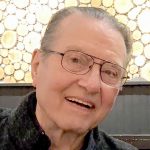 He grew up in the Detroit area, graduated from Jonesville High School and attended Henry Ford Trade School. He proudly served in the United States Navy. Art worked for 32 years at Great Atlantic and Pacific Tea Company (A&P Grocery). Through his employment his family moved around the United States. He and his wife purchased and ran the Liberty General Store. Later he restored the grist mill turbine into a hydroelectric plant. It was quite the undertaking. Art retired again after 27 years.

Art dearly loved his family and purchased land in Canada, where they built a cottage on the lake and spent 63 years, as a summer escape. The family enjoyed fishing, hiking, and exploring the vast wilderness. He was also a proud member of the Hanover-Horton Area Lions Club, where he ran the Lions Club Christmas cheese sales, the spring Vidalia onion sale and helped with the 4th of July annual chicken barbeque. Art also was a strong supporter of the local Red Cross blood drives. He will be missed by all who knew and loved him.

Due to COVID-19 restrictions Art’s family and friends will gather at a later date, to be announced. Memorial contributions are suggested to the Hanover-Horton Area Lions Club and the American Diabetes Association. Please leave a message of comfort for Art’s family or sign his guestbook at www.EinederFuneralHomes.com.