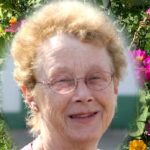 Carol Lou Hunt, of Grass Lake, Mich., passed away Friday, October 18, 2019, at the Henry Ford Allegiance Hospice Home in Jackson. She was born August 28, 1942, at Herrick Hospital in Tecumseh, Mich., the daughter of Otis and Shirley (Howard) Chatfield.

She was preceded in death by her parents, Otis L. and Shirley E. Chatfield; mother-in-law and father-in-law, Elilene and M. Ivan Hunt; brothers-in-law, Allen Hunt and Fred Hauch and nephew-in-law, Christopher Keefe.

Carol had many interests centered around family. She was a faithful follower of her grandchildren who played sports of all kinds. She was an advocate of 4-H and helped Shelly and Cory show livestock at the Jackson County Fair. She also helped her grandchildren in their efforts to raise and show their animals as well. From chickens to rabbits, to goats, to sheep, to steers, she helped them all. The sheep parents named her Sister Mary Ruth because she was always helping youngsters.

Carol and her husband enjoyed attending car shows and touring in their 1957 Plymouth, with their special friends Dale and Rosie Current; Bob and Darlene Wilkinson; Thom and Mo Baird; Phil, Meredith, and Christy Pearson.

The family wishes to say “Thank You” to Dr. Trimble, Dr. Kak, and Dr. O’Neill and all the nurses that cared for Carol and made this experience much easier.

At her request, an anatomical donation has taken place to The University of Michigan Medical School and a memorial service to honor the life of Carol Lou Hunt, will be held at the Hampton Funeral Home in Jackson, on Sunday, October 27 at 1 p.m. with Chaplain Daniel Sandoval officiating. The family will receive friends for visitation on Saturday, October 26, from 2-4 and 6-8 p.m. at the funeral home in Jackson. In lieu of flowers, please feel free to donate by giving blood, as Carol had received many transfusions, or contributions may be made to the Jackson County 4-H Foundation or to the East Jackson Athletic Boosters Club. Please visit www.hamptonfuneralhomes.com to sign the guest book and/or send a condolence to the family.