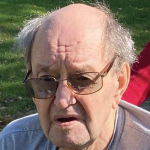 Billy Ray Cook, 89, passed away at his home surrounded by his family on Wednesday, October 20, 2021, while under the care of Arbor Hospice. He was preceded in death by his wife of 47 years, Vesta in 2000.

For over 30 years he worked in sales at the Napoleon Lumber Mill. He erected many pole barns, and he also did a lot of roofing in his life. He liked to fish and collect banks. Bill was a member of the New Life Worship Center (4532 Brooklyn Road, Jackson, MI 49201).

Services were held at the funeral home Monday, October 25, 2021, at 2 p.m. with Rev. Thomas Duckham officiating.