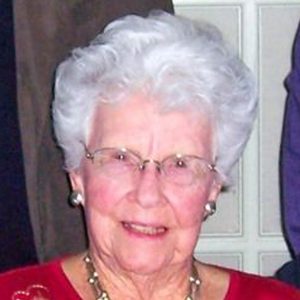 Maxine Carnett Grindstaf, 99, formerly of Red River, New Mexico, passed away peacefully under hospice care in Jackson, Mich. on July 18, 2020.  She was the daughter of J.B. and Velma Carnett, and was born in Lebanon, Missouri in 1921. For the past seven years, Maxine has called Michigan home, living six years in the Chelsea Retirement Center, and almost two years at Arbor North in Jackson.

Maxine lived through some tumultuous times. As a child of the Great Depression, her family lived in Northern Oklahoma, an area affected by The Dust Bowl. As a young woman with a small child and a husband who served in the Army Air Corps, she experienced the Second World War, and over the last months of her life, with humor and resilience, she weathered the restrictions of the pandemic.

By those who knew her well, Maxine was known as a feisty but compassionate lady. She was an avid sports fan, having played well a number of sports herself. In later years she followed baseball, football, and golf as her favorites.

A natural leader through the years, Maxine served in many local and state capacities in various organizations affiliated with the Southern Baptist Convention. On many occasions she lived and traveled overseas, first accompanying her pilot husband, Wayne, to Lima, Peru where they lived for three years. Two years after her Wayne passed away, she fell in love and married Dr. W.E. (Bill) Grindstaf. Along with her marriage to Bill, she also gained a son, Terry, who was the same age as her son Michael.

With her husband Bill, Maxine’s adventures continued. They served as the National Clergy Couple for the Baptist Expression of Marriage Encounter, a position that allowed them to travel extensively both in the U.S. and to other countries. They also spent a couple of years as co-directors of an Arab Boys Boarding School in Israel.  Upon their return to the U.S. from Israel, they lived in Eagle Nest, New Mexico, and for two years taught at the New Mexico Boys School in Cimarron.

A memorial service for Maxine will be held in Red River, New Mexico in the spring or summer of 2021. Memorial gifts in her name may be made to Henry Ford Allegiance Hospice, 2150 Kingsbrooke Drive, Jackson, MI 49202.