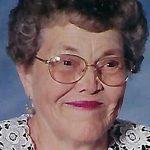 Verna Mae Williams, 88, of Jackson, formerly of Rollin, Mich., passed away on Monday, March 15, 2021, at Arbor Woods Assisted Living Community in Jackson. Verna was born on December 7, 1932, in Pittsford Township, Hillsdale County, Mich., to Leslie B. and Ellen M. (Church) Sheffer. She married Norris E. Williams on February 14, 1962, in Jackson, Mich., and he preceded her in death on December 4, 2011. Verna lived her early life in Rollin and then she moved to Jackson in 1961. She graduated from Addison High School in 1950 and then she graduated from Jackson Business University in 1951. She was a printer at the Jackson Citizen Patriot Newspaper for 22 years, retiring in December of 1987. Verna was a member of the Rollin Baptist Church in Rollin, a member of the Women of the Moose Lodge #156 of Jackson and a member of the Jackson Free Methodist Church in Jackson.

Surviving is one daughter, Carrie (Ken) Hall of Jackson; two step-daughters, Brenda Williams Monroe of Charlotte, Mich., and Laurie Williams of Longwood, Fla.; nine grandchildren, many great-grandchildren and many great-great-grandchildren; one sister, Vera Holifield of Eugene, Ore.; one brother, Virgil E. (Elaine) Sheffer of Eaton Rapids, Mich.; several nieces, nephews and cousins. She was preceded in death by her parents and her husband Norris “Mike” Williams.

Funeral Services will be held at 11 a.m. Thursday, March 18, 2021, at the Brown-Van Hemert Funeral Home in Hudson, Mich., with Pastor Thomas Ramundo officiating. Burial will take place in Maple Grove Cemetery in Hudson. The visitation will be from 2-4 and 6-8 p.m. on Wednesday.

Memorial contributions are suggested to Henry Ford Allegiance Hospice or a charity of the donor’s choice. Social distancing will be followed. Send condolences to the family at www.brownvanhemert.com.