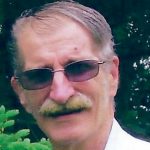 His legacy . . . Robert E. Baird, 69, passed away at Henry Ford Allegiance Health on Saturday, June 1, 2019.  Bob was born in Jackson, Mich., on December 21, 1949, to George and Esther (Patton) Baird. He married the love of his life, Karen S. Goodwin, April 22, 1988, in Jackson, Mich., and they spent 31 wonderful years together. Bob served in the U.S. Navy during the Vietnam War and was employed by Michigan Extruded Aluminum as a quality assurance inspector. In his spare time, Bob enjoyed working on his 100-year old Harley Davidson Sportster edition. Bob’s greatest joy was spending time with his family, especially his grandchildren and will be remembered for his kind heart and making people smile.

His farewell . . . A private natural farewell was held for Bob. Memorial contributions may be given to the family for future designation. Please leave a message of comfort to the Baird family by calling 877-231-7900 or sign the guestbook at borekjennings.com.