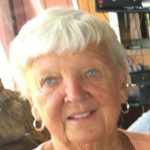 Meredith Ann Szostek, 87, passed away peacefully on Thursday, October 29, 2020.  She was born on August 2, 1933, in Port Huron, Mich., to Merritt and Elsie (Jokie) McDonald. Mac had the privilege of being married to two wonderful men, first being Gerald Burns and the second, John Szostek, who preceded her in death. She will be remembered for her love of life, family, friends, and the lake. Mac never met a stranger. If there was music playing, she was out dancing. She was a huge Red Wings fan and Michigan State fan. Mac never missed a party, and many considered her a “queen of the lake”. She was a past recipient of the Mary Reynolds Spirit of Clarklake Award, which is given to a person that contributed to the quality of life at Clarklake. Mac was one of the original members of the Pineslider’s Shuffleboard League at the Beach Bar and the Hobie Cat Fleet 58. She will be missed by all who knew and loved her.

Mac is survived by her son, Gerald (Karen) Burns; brother, Richard (Diane) McDonald and sister, Janet (Larry) Keef; one granddaughter, Natalie (Matt) Pendergraff; several nieces and nephews and her companion and caregiver of twelve years, Donald Hallas. She was preceded in death by her parents, husbands, Gerald Burns and John Szostek, and niece, Pamela Morse.

Private services were held at Eineder Funeral Homes – Brooklyn Chapel.  A public memorial service will be announced at a later date. Memorial contributions are suggested to the Clark Lake Spirit Foundation. Please leave a message of comfort for Mac’s family or sign her guestbook at www.EinederFuneralHomes.com.