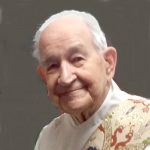 His legacy . . .  Louis Urban Weitzel, 99, passed away July 15, 2019. He was born on May 18, 1920, in Delphi, Ind., to John and Mary (Schmitter) Weitzel. Louis married the love of his life Kathleen McCarthy on March 14, 1943, in Casper, Wyo. He served in the Canadian Royal Air Force and then transferred to the U.S. Air Force serving honorably during WW II as a B-24 Liberator pilot. He was stationed in Brownsville, Texas and would layover in London England. After his military service he worked for Ford Motor Company/Tractor Division in Troy, Mich., as a computer programmer for 32 years retiring in 1977. Dedicated to his faith, in 1992 after his wife’s death, Lou became an ordained Catholic Deacon with the Diocese of Lansing. He was a former member of St. Joseph Shrine of Brooklyn and St. Mary on the Lake of Manitou Beach. Deacon Lou a resident of Somerset Center since 1969 was a member of St. Rita Catholic Church and Knights of Columbus – St. Rita Chapter. He served graciously at the Jackson Interfaith Shelter for many years. Deacon Lou’s love of God and family found him praying for others at all time.

His family . . . Deacon Lou will be missed by his children, Thomas (Janice) Weitzel of Tecumseh, Kathy (Thomas) Hesse of Northville, and Kimberly Weitzel of Somerset Center; ten grandchildren, 14 great-grandchildren and many nieces and nephews. He was preceded in death by his parents, wife, Kathleen; two brothers, Fr. Robert Weitzel and Fr. Louis Karry.

His farewell . . . Deacon Lou’s family and friends gathered together Monday, July 22, 2019, from 1 p.m. until 8 p.m. at St. Rita Catholic Church, 10516 Hayes Road, Clarklake, Mich., with a Rosary at 7 p.m. and a Vigil at 7:30 p.m. Mass of Christian burial was held Tuesday, July 23, 2019, at 11 a.m. where he will lie in state from 10 a.m. until time of Mass. Bishop Carl F. Mengeling will serve as celebrant. A private burial will be held at Holy Sepulchre in Southfield, Mich. Memorial contributions are suggested to Jackson Interfaith Shelter at interfaithshelter/donate.com or St. Jude Children’s Hospital at stjude.org. Please leave a message of comfort for Deacon Lou’s family by signing his guestbook at www.borekjennings.com.