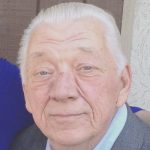 Larry served the nation in the U.S. Army during the Vietnam War. When he was stationed in Germany he worked as a company clerk. He worked at Tecumseh Products and retired after many years as a truck driver for USF Holland Freight. He loved being an active member of St. John’s United Church of Christ. He had served as president, as well as participating on multiple committees, including the Community Baby Shower. He also provided the sound during church services.

Larry volunteered his time as the DJ for the Cascades Civitan Club, a club that provides entertainment for people with disabilities. Larry loved them as much as they loved him. Larry also served as Trustee on the Napoleon Township Board. Larry had a strong presence, spoke his mind and earned respect from those around him. He was good at everything he did from trivia games to bowling to coaching youth football and baseball, as well as high school baseball. He had a passion for music and was a well-known drummer.

In 1962, he was part of the band “Hesitations”, and they released a single of Wild Little Willie through D-Town records. Larry was offered a job by Freddie “Boom Boom” Cannon to join his band, but he turned him down due to his dedication to the Hesitations. In 1998, a reunion was spurred after a compilation of the band’s music was released by Cub Koda who grew up idolizing the Hesitations. The CD “The Del-Tino’s meet the Hesitations” was released by Norton records in 1998. In the 70-80s Larry was part of the Bob Donley Trio (with Dennis McCann) where they played at local bars, where people came from all over to hear him play.

During the last three years of his life, Larry grew even closer to the Lord and his family.

Larry’s family would like to give special thanks to his health care providers: Dr. Sean Vance and his office staff, nurses Kristi Shannon and Portia Teller, as well as Pamela Pittaway from dialysis.

Memorial Services will be held at St. John’s United Church of Christ, 801 S. Mechanic St., Jackson, MI 49203 on Saturday, August 21, 2021, at 11 a.m. with visitation beginning at 10 a.m. Following a luncheon immediately after the services, interment of cremated remains will place at Oak Grove Cemetery in Napoleon with Military Honors offered by the Jonesville American Legion Post #195 Honor Guard. For those who wish, contributions in Larry’s memory may be directed to his church. (www.arthur-day.com)