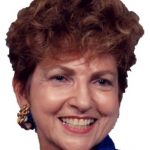 Helen Passed from this earth to be with her beloved Bernie on Thursday, March 5, 2020. She was born August 29, 1931, the youngest of five children and only daughter of David and Alma (Williams-Hawkins) Watson. She married her childhood sweetheart Bernie Reinink on February 17, 1947; he preceded her in death on February 17, 2015. Helen grew up in Garden City, Mich., where she made a lifelong friend of Mary Jenkins Masters of San Antonio, Texas.

Helen and Mary loved to travel with their husbands, Bernie and Eddie and met up for vacations whenever they could. While Helen was young and raising her family, she was very active in the PTO and their Pinochle Club and enjoyed gardening, canning and visiting with the other mothers in the neighborhood. In 1968 Bernie and Helen and their family of five kids left the suburbs of Detroit for the country life and moved to the Irish Hills wherein 1969 they began the business of Bernie’s Country Store on U.S. 12. Where she could be found in the gift section or behind the Deli Counter almost every day.

She loved each of her eleven grandchildren and fourteen great-grandchildren very much – each in her own special way – always leaving a bright red lipstick mark on their cheeks as proof. She was always interested in “What you had been Up To” . . . and she taught us the love of espresso coffee in cute little cups, crisp chicken patties and ice cream while listening to Paul Harvey on her kitchen AM radio.

The pool at the old farmhouse on Round Lake Highway served for many summers as the gathering area for all of the grandkids. When the kids showered off after swimming in the pool, they could count on tons of pretty smelling shampoos to try out . . . and who could forget Grandma swimming late at night with Gidget the dog while still wearing ankle bracelets and pantyhose and her bathing suit.

An overnight stay with Grandma was never complete until she helped you say your prayers as you were tucked safely into bed. But best of all whenever any of us were sick or under the weather . . . Grandma would always show up with a small bag of goodies from the store . . . “To make us well”. We will miss you, Grandma . . . Take good care of Grandpa Bernie and King the Wonder Collie!

According to Helen’s wishes, her body has been donated to the University of Michigan Medical School. A private family memorial service will be held at a later date. Arrangements were handled by Purse Funeral Home of Adrian, www.PurseFuneralHome.com.